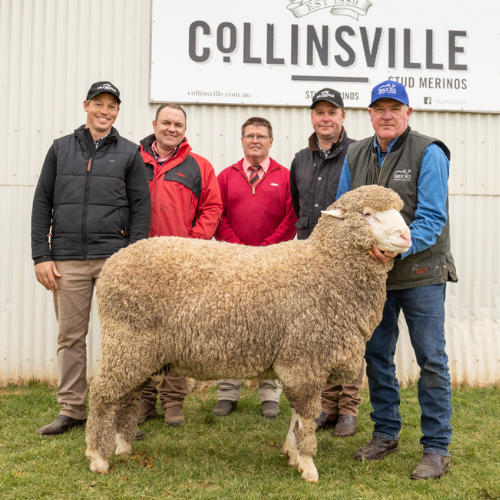 Selling at auction for a price of $88,000, a Collinsville Stud Merino Poll Merino ram has topped the sale charts for 2021.

There was high anticipation for the stud’s annual auction and it delivered with full clearance of 250 rams and a top that outnumbered the 2021 Adelaide Ram Sale.

Bids started at $30,000 and the auction competition was hot between interstate studs (both over the phone) Kolindale Stud, Kulin, Western Australia and eventual winners Westray Merinos and Lach River Merino Stud.

“Lot 2 was an incredibly rare offering by Collinsville. He is the complete package with fantastic wool, structure and meat traits.

He is going to go on and do great things for the industry as he’s hard to fault and one of the best Poll Merino rams put to the market.

You can’t go wrong with Collinsville genetics which gave me absolute confidence to highly recommend this ram.

I can’t thank Richard Chalker, Lach River and Blake, Westray enough for their faith and trust in my recommendation and appraisal of lot 2,” said Tony Brooks, Brooks Merino Services.

Back and forth bidding and excitement amongst the crowd saw the hammer drop at $88,000 just moments before Kolindale tried one additional rise.

“We feel that purchasing a half share of lot 2, with Westray, was a unique opportunity for us to secure top quality genetics. Lot 2’s pedigree has already proven itself within our stud,” Mr Chalker said.

“Star Affair 641 is doing great things for our stud which has given us confidence to purchase lot 2 for the price we did given its dam’s sire is out of Star Affair.”

Sharing in the ownership of Lot 2, Westray Merinos principal Blake Tremain-Cannon said they saw the animal as a ram lamb and were immediately impressed.

“Collinsville rams’ depth and consistent performance allowed us the confidence to go up a gear in price. Lach River was instrumental in our purchase. We are so grateful for the Chalkers for their half share support,” Mr Tremain-Cannon said.

With Collinsville bloodlines and genetics already on their stud, Mr Tremin-Cannon said the pedigree of lot 2 provided excellent insight into where they were headed.

“We liked lot 2’s big frame, excellent structure, quick maturing traits with the wool quality and quantity that we are striving for in our stud,” Mr Tremain-Cannon said.

“Our faith in Tim Dalla and George Millington’s service from Collinsville also meant our confidence is high because we know we are backed with excellent support for anything we need when it comes to our purchases. We think he’s the best poll merino ram sold this year,” Mr Tremain-Cannon said.

“Lot 2 was exceptional.” Mr Wetherall said. “He would have gone to Adelaide in the past and was also a ram they could have easily kept. His whole presence, make and shape, he just oozed stud duties and stud qualities,” he said.

“The active bidding on him showed people appraised and appreciated him for all those qualities as well.”

On the day, 22 studs actively bid and purchased, showing the depth of the Collinsville genetics and importance of continuing the strong bloodlines.

Collinsville general manager Tim Dalla thanked the purchasers and underbidders for their fierce competition throughout the day and for lot 2.

“We always thought he was a pretty good ram. He’s embryo bred, has an outstanding structure, excellent wool quality and is the heaviest cutting in the team,” Mr Dalla said.

While lot 2 was originally destined to be kept as a stud reserve, the interest in him saw Collinsville change their mind.

“We were going to keep him as a stud reserve but we had (a fair bit of) interest in him so we thought we would sell him.” Collinsville will AI from him to their flock.
Another standout on the day was lot 4 which sold for $58,000 to Greenfields, Hallett, SA.
Lot 4, with tag 200252 sired by Masterbuilt 53, had a micron reading of 20.9 and will join the Greenfields breeding team with semen shares being purchased by North Cowie Merino & Poll Merino Studs, Warooka, SA and Manunda Merino Stud, Tammin, WA.
Greenfields principal Robert Sullivan said lot 4 stood out to them as a safe ram they could use with a lot of confidence.
“He was a very correct ram with great structure. Great on his feet and hindquarter, square behind, great neck extension and really soft pure nuzzle,” Mr Sullivan said.
“He has a long staple and even stylish fleece.”
In the breakdown; 22 stud sires were offered in a special selection with a top of $88,000 and averaged $16,318, while 228 commercial rams sold to an average of $2611.
With bidding via AuctionsPlus as well as a large crowd in attendance, 68 buyers registered for the day’s proceedings; from various towns in Victoria, QLD, NSW, and throughout South Australia (Tumby Bay, Keith, Cummins, Burra, Clare, Jamestown) as well as Western Australia.

Auctioneer Tony Wetherall said Collinsville had a terrific lineup of rams, once again.

“They have a big influence over the Merino flock in Australia in both commercial and stud point of view. The quality and dual purpose traits of the rams, and the performance data on them was exceptional right throughout the catalogue,” Mr Wetherall said.

“(there was) A great attendance of stud buyers from SA here today and online, the stud rams through that front row are very, very strong.”

Held at Collinsville Sale Complex, Hallett, the auction was conducted by Elders.