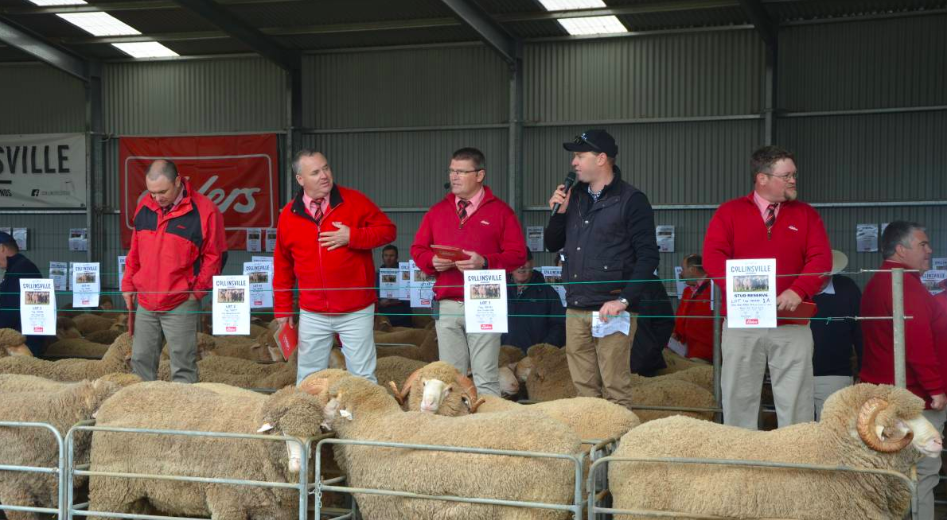 A LATE inclusion to the Collinsville sale lineup rocketed to the top price of $31,000 at the stud’s successful on-property sale at Hallett on Monday.

The impressive catalogue of 251 rams had an average micron of 20.5, with an average bodyweight of 113 kilograms.

The top-priced ram, a half-brother of Collinsville 180641 which sold for $72,500 at the recent Adelaide Ram Sale, was bought on behalf of Greg Carmody, Mittakeri stud, Kulin, WA, by Collinsville stud consultant Michael Elmes.

Initially a stud reserve, it was a last-minute inclusion to the sale according to Collinsville studmaster Tim Dalla, who said they fielded numerous inquiries about the ram in the lead up to Monday’s sale which prompted the decision.

Mr Elmes said the buyer had been a bidder on the $72,500 half brother in Adelaide and was impressed by this ram’s length of staple in particular.

The top-priced Poll Merino also attracted strong bidding competition and was eventually knocked down for $21,000 to KB,BJ&PJ Ward, Kyooma, Ungarie, NSW, who breed their own rams for their commercial ewe and lamb enterprise.

“We’re trying to thicken our sheep up,” Brian Ward said.

“It’s got size and it’s got everything we want.”

“The competition on top price stud rams was very good following Adelaide and we were extremely pleased with the full clearance and depth in the rams,” he said.

“The amount of support we had from both new buyers and regular buyers was very pleasing.”

Due to tough seasonal conditions, there were some regular pastoral clients missing, so Mr Dalla said they were ecstatic to achieve a full clearance.

“We always try and be consistent with our breeding and aim for size, constitution, structure and a large, quality wool cut,” he said.

Elders SA stud stock manager Tony Wetherall, who knocked down the $31,000 buy, said the presentation of Collinsville’s rams was “outstanding”.

“Collinsville is a leading stud in Australia and influences so many commercial and stud flocks,” he said.

“The rams are big, well-grown, they cut a lot of wool and they really do fit that dual-purpose Merino ram type. That’s why these rams survive and thrive throughout Australia.

“If seasons were better and more of their pastoral and marginal area clients were here the sale would have been even stronger.”