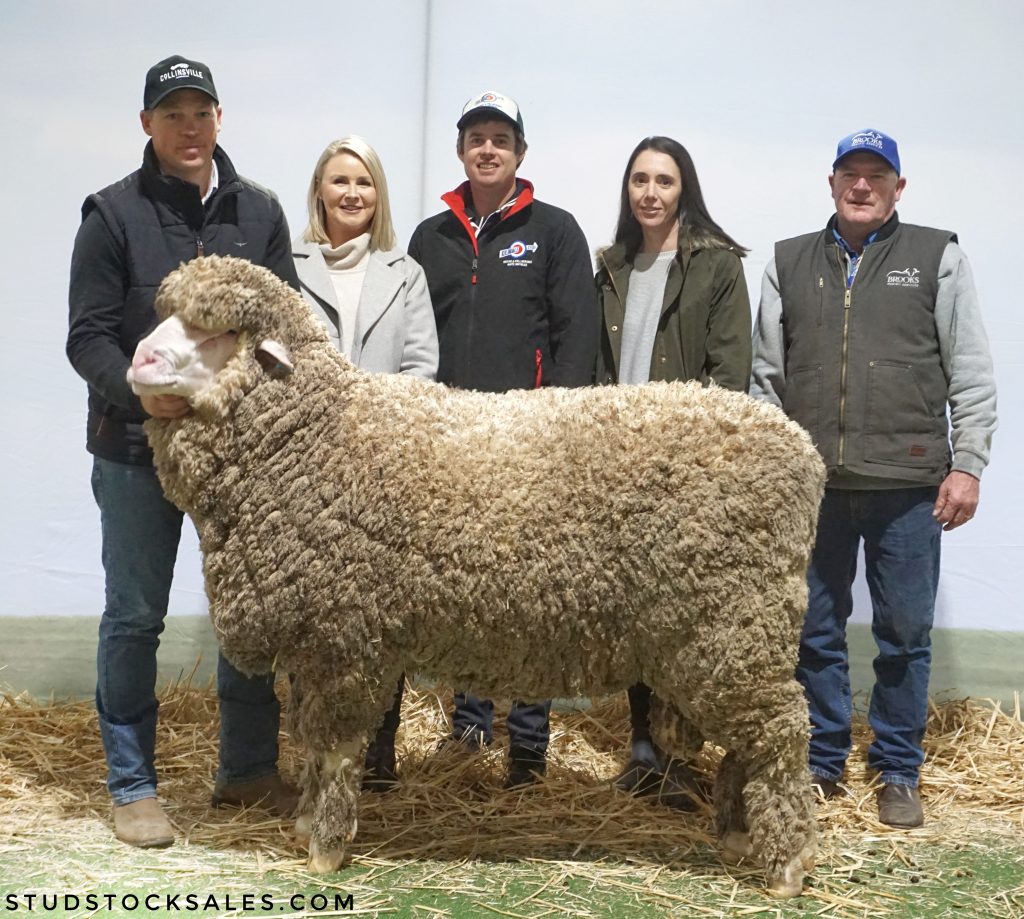 Congratulations to Kolindale Stud, Dudinin WA on their private purchase of Collinsville’s Emperor 395 for $115,000 at the Australian Sheep and Wool Show, Bendigo, Victoria at the weekend.
Emperor 395 carries a 20.6 micron fleece with a standard deviation of 3.1 percent, a coefficient of variation of 15pc and 99.4 comfort factor. He is a May 2020 drop and is sired by Collinsville Stud Sire, Emperor 351.
“Kolindale principal Luke Ledwith said the ram was probably the best poll Merino ram he has seen ‘with a big pure muzzle.’”
“He [Emperor 395] has got a real elite lustrous wool with a big carcase,” said Luke Ledwith, Kolindale Stud. “We are all about quick maturity and trying to get wether lambs off.”
Here at Collinsville, we strive to breed and offer commercially profitable sheep for our clients carrying large frames, fast growth, excellent fertility rates and carcass attributes.
Collinsville sheep are renowned for producing heavy-cutting, white and soft handling fleeces coupled with excellent conformation and constitution.
“395 is just an exceptional poll sire, the best poll ram we’ve ever bred, with great purity in the head, perfect polled factor,” commented Tim Dalla, Collinsville Stud.
“395 has 11 months of wool on him and is a 2-year-old shed-prepared ram. His dad cut 18 kilograms when shorn the week of Bendigo, so we would expect 395 to cut similar – 18-20kgs full wool,” said Tim.
Tony Brooks, Brooks Merino Services, facilitated the private sale.
In Tony’s words, “Emperor 395 is an outstanding Poll Merino ram. He’s a rare type that doesn’t come along all that often. His meaty frame and terrific handling wool with excellent coverage sets him apart. It’s rare to have both coverage and high-quality wool with incredible structure and frame on a sheep.”
“Kolindale Stud has been on the hunt for a ram of this calibre since missing out on a Collinsville ram last year. 395 was to be kept as a Collinsville reserve stud sire, however, being a once in a generational ram – he’s exactly what Kolindale have been chasing to add to their breeding program,” said Tony.
Read the full article from Sheep Central: https://www.sheepcentral.com/collinsville-ram-sells-for…/
Pictured: Emperor 395 with Collinsville’ General Manager, Tim Dalla, with his wife Jade, Kolindale’s Luke Ledwith, his wife Daniella and Tony Brooks from Brooks Merino Services. Image by @studstocksales
To learn more about our upcoming ram sale, and to secure Collinsville’s genetics, please visit our website: www.collinsville.com.au/sales-events
600 RAMS. TWO STUD SALES. ONE DAY. ONE LOCATION. Tuesday 20 September 2022.
600 rams will be on offer from two leading Australian Poll Merino and Merino Studs on Tuesday 20th September at the Collinsville Sales Complex, 191 Popperinghi Road, Hallett, SA.
The East Bungaree Stud sale commences from 11am with Collinsville Stud Merinos’ sale to follow at 1.30pm.
Both sales will be interfaced with AuctionsPlus.