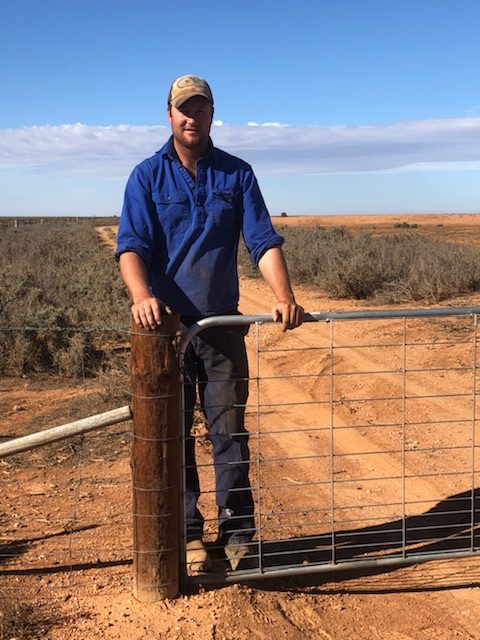 Tom Riggs is a fifth generation farmer on his 80,000 acre pastoral property 45km southeast of Burra, South Australia. His family ties to the region can be traced back even further, to 1873.

Born into the Merino industry, Tom’s business goals are common ones: to improve lambing percentages and wool cut. Anyone in this harsh pastoral region will know this is a case of easier said than done, with the conditions requiring a particularly hardy breed of sheep.

“The bloodline that we were on before 2008, the wool was beautiful but there was too much body wrinkle,” Tom says.

“We were getting hit with flies and it wasn’t working for us in the pastoral country.”

This is the primary reason that, ten years ago, Tom decided to introduce Collinsville genetics to his flock.

“Collinsville are a famous stud—I’ve heard of the brand ever since I can remember,” he says.

“They promoted a big frame and a long, plain-bodied sheep, and that’s just what we were after.”

“At Collinsville I know that most of the rams were bred out in bush country, so they had already adapted to my conditions.”

“I’d seen the progeny and I liked it.”

The improvements Tom has seen in his enterprise over the last decade have certainly validated his trust in the Collinsville name. Since working with the stud, the farm has also begun to pregnancy test, and these factors combined have driven some impressive results.

“Before 2008, our conception rate was sitting at an average of 75 to 80 percent. It now is up around 90 percent, and in pastoral land we think that’s pretty unreal!”

But when it comes to Merinos, there’s obviously one category that holds the most weight.

“In terms of wool clips, we’ve got defined crimped wool of about 22 micron and 6kg average fleece,” Tom says.

“The fleece weight itself has improved by around a kilo, but it depends a lot on the season.”

“I’d say it’s the look and quality of the wool that has improved most. It’s really thick, white, and with a real defined crimp—good looking wool.”

Of course, it’s not just Tom’s opinion that matters, but that of his customers. In that regard, Tom says that Collinsville progeny bode particularly well.

“The Collinsville bloodline is distinct. They stand well in the pen and present well; longer and straighter in the back.”

“In fact, two clients that we sell ewes to have called to say, ‘we want these sheep again’.”

When asked if he would continue to work with Collinsville sheep into the future, Tom says simply: “Why change something that’s working?”

“We see more meat on our lamb carcasses—with wether lamb sales we’re picking up $20-$30 per head with Collinsville genetics.”

“So we’re obviously very happy with the bloodlines, but also with the customer service.”

“George and Tim always ask how the rams are going and what we are up to. They’re genuinely interested in what we’re doing.” 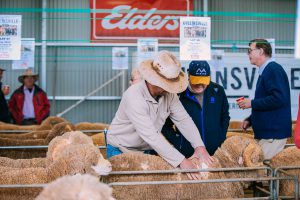 Mitch Lyons is a fourth generation farmer in NSW near Molong. His 4400-acre property varies from arable land to lighter, sedimentary type hills and averages a 24inch annual rainfall. The farm is home to 2500 ewes, 200 cows and 700 acres of mixed crops.

Mitch’s goal is that of every farmer: to increase the dollar return per head. For him, that looks like better genetics and better results each year. Unfortunately, in the past this goal has been waylaid by sheep that were just not suited to his specific operation.

“With the higher rainfall they tend to develop a few skin problems.”

“For two years I had rams that just didn’t work with my ewes. The offspring were a bit too heavy, too complicated and they had wool problems.”

It wasn’t until he came across Collinsville rams at the Dubbo National Show Sale 4 years ago that Mitch found his perfect match.

“The stature and structure of the rams caught my eye,” he says.

“The Collinsville sale was just a few weeks later, so I got in the ute and drove down to Hallett.”

“We bought 4 or 5 that first year. The stock didn’t have much time to settle in, they pretty much got straight off the ute to work with the ewes!”

The resulting offspring have impressed Mitch, so much so that he’s purchased more Collinsville rams each year since.

“It’s a 12 and a half hour drive, so I’d only do it if I was sure of getting rams that are suitable and doing what I want them to do,” he says.

“With Collinsville, I’ve been able to get some very handy rams for reasonable prices.”

What makes a ram ‘handy’ in Mitch’s eyes?

“One of the reasons we’re so happy with Collinsville is that, realistically we bought sheep from a very dry area compared to here, but they’ve come in and crossed really well,” he says.

“Their bodies don’t have that extra skin but they still carry quite a lot of wool.”

“They’ve got soft skins and the wool is a really nice, bold, crimped style.”

Another thing that’s important to Mitch is decreasing the time it takes for his sheep to become profitable. This, he says, is where Collinsville progeny really stand out.

“In the past few years, Collinsville genetics have definitely helped us get our Merino wether lambs off earlier and heavier.”

“We’re taking advantage of their early maturing patterns. Last year we sold wether lambs with two weeks skin on them for an average of $124, and they cut $35 worth of wool as well.”

“That’s by far the most we’ve ever got from them.”

“It’s difficult to draw figures as we’ve changed our shearing and lambing times, but I would say that last year’s Collinsville cross lambs were probably the best we’ve ever bred as far as growth rate.”

It’s obvious that Mitch is happy with the Collinsville stock, but what does he think of the service?

“The knowledge and the information you get out of staff, and their availability to answer questions has been very, very good,” he says.

“In helping me do what I want to do—turning sheep off as quickly as I can and still growing high quality, volume cutting sheep—I think Collinsville do a top job.”

TIME TO OPTIMIZE YOUR FLOCK?

Collinsville is well known around Australia for producing top rams with superior genetics. We have proven time and time again how our sheep outperform the market in the ring and the paddock.