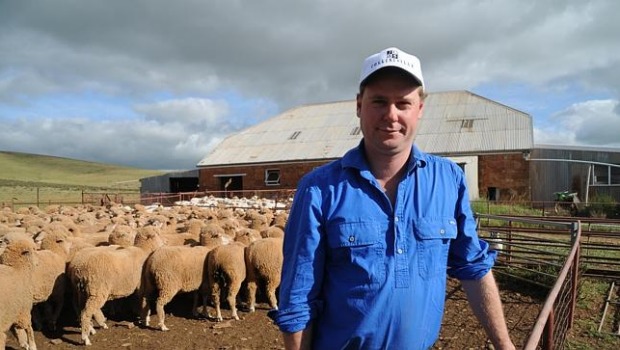 By The Australian Financial Review

He may also be its most entrepreneurial owner, having made his money in coffee beans and then parcel delivery.

A year later he bought Adelaide ­parcel delivery business APD, which he still runs with a business partner.

His first foray into agribusiness came when he acquired Mid North station Cappeedee for $5 million in 2010, ­moving his wife, Sophie, and two young children onto the land. He also owns a cattle station at Parawa. “Our agricultural future is bright. It is one of the few sectors, like mining, where we have a natural competitive advantage and are a low-cost producer,” he told The Australian Financial Review.

He jumped at the opportunity to buy 56,000-hectare Collinsville after Mr Handbury agreed to sell him both the land and its prized 7000 merino and poll merino ewes and lambs.

“They come with fantastic pedigree , being responsible for up to one-third of the genetics embodied in the national sheep flock. “They’re also a dual purpose animal providing both wool and meat,” Mr Millington said.

“They are large-framed, ­heavy cutting sheep. They produce the larger lambs that producers want and the heaviest fleeces for growers.”

Mr Millington said the outlook for both wool and lamb meat was strong.

“We have seen both the high and lows of the wool industry, but now that the stockpile and excess bails have gone we have settled into fairly solid market, where growers can get $1200 to $1400 a bail . . . and everyone in Asia is eating more protein so there’s a strong business case for the meat as well,” he said.

Mr Millington will bring the business acumen that drove the success of his Adelaide businesses to the running of Collinsville. APD is now Adelaide’s largest hub and spoke delivery network, processing 10,000 parcels a day and tapping into online sales-driven demand. His attitude is simple: “A lot of people are afraid to take new things on. But if you work hard, ask a lot of questions, surround yourself with experienced people you can be successful. You also need a bit of luck – you don’t get to pick when it rains.”

His plans for Collinsville include removing all cropping and turning it into a pure livestock operation.

“We will use modern technologies such as Australian sheep breeding values (ASBVs) combined with traditional ­visual classing to improve the quality of stud,” he said. He plans to implement an embryo transfer program to artificially inseminate 500 ewes a year and conduct semen sales throughout the year. Next year he will re-launch commercial ram auctions at Collinsville for the first time in seven years.

As for what he paid for the land and stud, Mr Millington won’t divulge the details.

Mr Handbury paid $7 million for Collinsville when it was a 47,000-hectare stud running 18,000 merino sheep. The land was passed in on a ­vendor bid of $4.5 million in November.

“I got a fair market price, that’s all I am going to say ,” Mr Millington said.