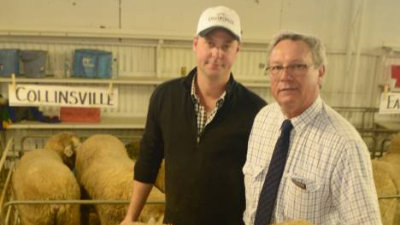 “We have hired Michael as a stud consultant to work with us and provide a very experienced outside objective opinion of our breeding program,” he said.

“Michael brings a lifetime of experience and is working with Tim Dalla and myself to make the best genetic decisions for the business going forward.”

Mr Millington bought Collinsville two years ago in November, and he is taking the stud back to being the market leader in Poll and Merino genetics in Australia.

“While Tim, who has been studmaster for nearly eight years is still ultimately responsible for classing and breeding decisions, Michael has been appointed to offer advice on these decisions while drawing on his vast experience within the Merino industry so the stud can continue to grow,” he said.

Mr Elmes grew up near Hughenden and he started his career as a jackaroo on the Uardry stud, Hay, in 1978.

“I was lined up for Goolgumbla, but a drought across the Riverina meant a lot of sheep were away so there wasn’t a job,” he recalls.

“When Duncan McDonald, who had been to school with my father, was selecting some rams at Uardry, he heard of a vacancy and so I went there.”

Of the identities in the wool industry who influenced his career, Mr Elmes recalled the late Tom Lilburne, classer at Uardry.

“To this day when classing commercial sheep I always check the classed-in portion as it is the last few sheep you pull out are the most important,” he said.

Mr Elmes success as a sheep classer has been noted with many of his clients featuring in Merino ewe competitions. During the 2016 Lake Cargelligo competition every one of his flocks won a prize, taking first, second, third and the encouragement award.

“This continues his run of seven years winning the competition with numerous placings as well,” said spokeswoman Linda Thomas.

In the Don Brown Memorial at Condobolin, four clients on four bloodlines have won four years in a row, and in the Peppin Shaw, a client won in 2013 and 2014.

Mr Elmes said the Merino industry has always evolved to meet market demands, and sees the breed continuing to be an integral part of the sheep industry.

“The Merino is the foundation of all our flocks,” he said. “There will always be need for fibre and red meat, so you can position yourself with Merinos to meet all markets.”